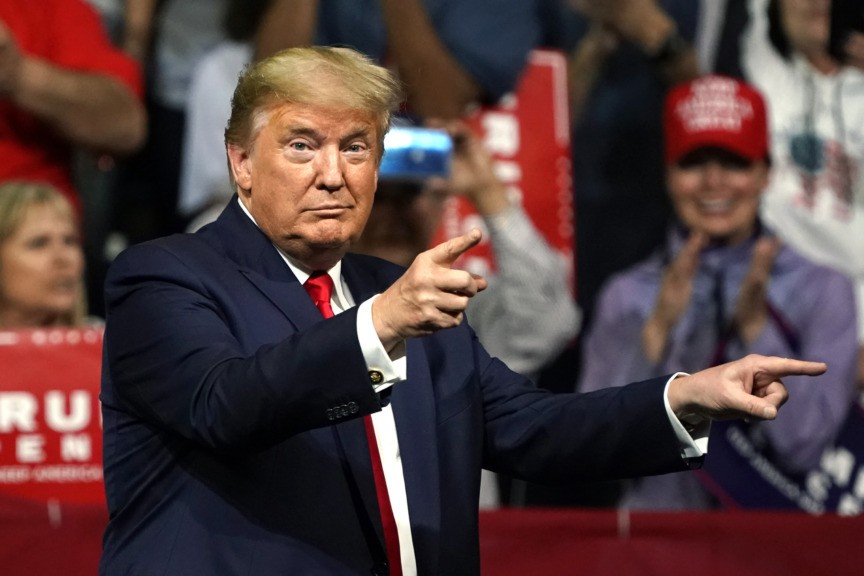 8:30 PM: Trump says “Mini Mike” is not going to make it to the general because he can’t debate and is not meant for the camera. Trump thinks it’s going to be “Crazy Bernie” who ends up winning.

8:29 PM: Trump says every Democrat running for president wants to eliminate domestic oil and natural gas production, which will destroy jobs and property values in Colorado.

8:25 PM: Trump now talks about the 180,000 new jobs created in Colorado including 25,000 new manufacturing jobs. Trump also highlights the record-low unemployment rates for minorities. Trump says the unemployment rate for workers without high school diplomas is also at its lowest in history. He says forgotten communities are being lifted up through opportunity zones. He also talks about moving the Bureau of Land Management out of Washington to Colorado.

8:17 PM: Trump now introduces Cory Gardner, who says they will win because they will fight against the left’s “socialist tide.” Gardner says the “normalization of socialism by Bernie Sanders” in 2016 was “dangerous.” Trump says Gardner has his “complete and total support.”

8:15 PM: Trump introduces UFC president Dana White. He joins Colorado lawmakers on stage and says that he is not a very political person but he has known Trump for 20 years and they have become closer since he has become president. He says Trump is a “fighter” who “loves this country” and “is doing great things for this country.”

8:11 PM: Trump says he heard Pence gave a good speech. But he says he tells him to never make it “too good” so he is not upstaged.

8:03 PM: Trump says Colorado Springs is being strongly considered for the Space Command because they have all of the infrastructure.

7:57 PM: Trump, after briefly talking about the booming economy, says his election-night win was the most exciting television that anybody has ever seen, including UFC and ESPN programming. Trump then says 7 million new jobs have been added since his win.

7:52 PM: Therapy session seems to be over, and Trump now praises Gardner for being with him all the way during the “impeachment scam.”

7:45 PM: Trump now griping about not being selected Time‘s person of the year. Crowd boos after he says he got beaten out by Greta. He’s now going over online polls that showed him winning debates in 2016.

7:43 PM: Crowd chants “lock her up” after Trump says he beat Crooked Hillary in all of the debates. Trump says Clinton is as “crooked as a three-dollar bill.”

7:40 PM: Trump says Mark Zuckerberg congratulated him over dinner that he was #1 on Facebook.

7:31 PM: Trump says America is doing better than any other nation and speaks about rebuilding the military. He says “we don’t worry about budgets” when it comes to defense and security. Trump talks about the “great American comeback” and the best poll numbers he has ever had. Trump mocks “Mini Mike’ and says Klobuchar “choked” last night at the debate when she asked “Alfred E. Neuman” if he was saying she was “dumb.” Trump says that was the “end of her campaign.” Trump now goes on a tangent about how Fox News does not treat him as well as they had in the past.

The Trump economy is amazing across the country but nowhere better than in Colorado – unprecedented unemployment rate of 2.5 percent.

7:29 PM: Trump honors veterans of Iwo Jima, marking the 75th anniversary of the start of the battle. Trump says America is a truly a “land of heroes” and he wants to recognize veterans of the Vietnam War and the Iraq/Afghanistan Wars that are here tonight.

7:28 PM: Trump says he is thrilled to be back in Colorado Springs and says he will win Colorado in a “landslide.” He wants voters to get Cory Gardner across the finish line because “he’s been with us 100 percent.” He says there has been “no wavering.”

7:00 PM: Pence says last night’s debate was a “demolition derby.” He says while Trump was speaking in Phoenix, people all across the country saw the Democrat free for all. He says Trump won the debate in a knock out.

Gov. Jared Polis met with President Trump before the president left Peterson AFB to advocate for bringing Space Command to Colorado permanently. Here’s a statement from the governor. #copolitics pic.twitter.com/7CYLN6n9nj

6:45 PM: Another “Woodstock for Republicans” in Colorado in frigid temperatures.

According to the Denver Post “as many as 20,000 people gathered in Colorado Springs for a Trump campaign rally Thursday afternoon at an arena that holds half that number.”

#HappeningNow The @POTUS and Air Force One have arrived in Colorado Springs. pic.twitter.com/2CnJgto85p

We’re here! @realdonaldtrump rally in Colorado Springs. Focus on the Family’s James Dobson is the first speaker. He ends to chants of “USA!” #copolitics #HeyNext pic.twitter.com/2kaYHJXoB7

“This is Woodstock for Republicans!”

In Colorado Springs, people are camped out this morning ahead of @realDonaldTrump’s visit.